Book Review: Women and The Conquest of California, 1542-1840: Codes of Silence 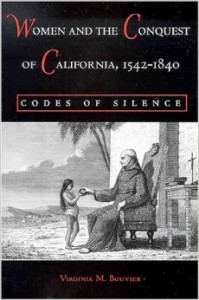 The Alta California frontier of New Spain, like most other frontier regions including the 18th and 19th century U.S. West, was characterized by a significant male predominance among the colonizing population. Indeed, since this frontier was dominated by two institutions, the presidio and the mission, which were staffed by exclusively male groups, the Spanish army and the Catholic priesthood, the imbalance was perhaps even more pronounced. Since the members of these two groups produced most of the official documents of the province, the masculine character of Spanish, and later Mexican, Alta California was one of the place's most deeply rooted public characteristics.

But this frontier was never really so one-sided. In addition to the very visible women like the wives and daughters of the governors and the military officers, the colonials who constructed and maintained the province's infrastructure--the common soldiers, blacksmiths, weavers, artisans, ranch hands, and the like-sometimes came to California as members of families or formed families while they were there. Most importantly, roughly one half of the indigenous population whom the first colonists contacted were not male.

Over the past two decades, the study of the western U.S. frontier has been immeasurably enriched by attention to issues of gender, and the study of Spanish and Mexican California has experienced the same benefit. Studies by Antonia Castaileda, Albert Hurtado, Rosaura Sánchez, Gloria Miranda, Genaro Padilla and many others, have deepened our understanding of women's many roles in California's early history. Now Virginia M. Bouvier, in WOMEN AND THE CONQUEST OF CALIFORNIA, offers the first full-fledged application of this approach to the entire sweep of California's Spanish and Mexican periods. The book is an impressive accomplishment, and it deserves wide readership.

It is well known that California existed as a place in the imagination before the name was applied to the actual peninsula off the northwest coast of Mexico. Bouvier begins with the 1510 novel, THE DEEDS OF ESPLANDIAN, in which the mythic island of California made its debut on the historical stage. In this work, California was "pagan, female, hierarchically governed, and easily subdued," and these qualities became important as Spaniards confronted the actual California. In a series of closely argued and rewarding chapters, Bouvier reviews the history of Alta California from the point of view of where the women were, who they were, and what they were doing. Rereading a very large number of primary sources, she is able to penetrate the cultural, religious, and historiographical "codes of silence" which have long obscured the full history of Alta California.

Bouvier demonstrates that women were, in many ways, central to the development of this land. All Spaniards, for instance, assumed the moral superiority of their way of life to that of California's native peoples, and they pointed to indigenous women as evidence for that conclusion. Early explorers purported to discover that some indigenous male groups were eager to share their women with the Spaniards and this alleged willingness was used both to entice soldiers and to legitimate the conquest by demonstrating that indigenous women needed to be protected from their own men. The major tension in California the late 18th and early 19th centuries was between missionaries and soldiers. One source of that tension was the raping of indigenous women by the military, which the missionaries contended was one reason for their difficulties in attracting converts. Later in the 19th century, military raids into the interior were partially spurred by the perceived necessity of replacing the many women who were disproportionately perishing at the missions. With these and many other examples, Bouvier consistently and clearly shows that gender concerns belong at the core of California's early history.

But showing that women need to be included in the historical narratives is only part of Bouvier's accomplishment in this book. Even more importantly, she offers clues to the ways in which this inclusion can affect the shape and structure of the narratives themselves. The experiences of Eulalia Callis, for instance, demonstrate clearly that, at the precisely the time the military and the missionaries were contesting with each other for supremacy in the province, they could quickly join ranks when their joint control was perceived to be threatened. Bouvier's analysis of indigenous marriages at the missions demonstrates that matrimony offered conflicting things to native women. While traditional theology relegated them to a subordinate place in the family, the colonial project also increased their status by making them the repositories of the family stability which was at the center of the effort to Hispanicize the entire region. The experiences of Apolinaria Lorenzana and Eulalia Pérez show that patriarchy in Mexican California was complex reality. While it was rigid and strict in some areas, it was also flexible in others.

Bouvier's chapter on resistance is particularly interesting. She points out the persistence of woman shamans, healers, and visionaries in the indigenous cultures, and argues that these elements made women central to the ongoing resistance efforts which always existed beneath the well known revolts which punctuated the life of the province. This is quite true, and I think that the existence of these female figures points to something equally crucial in the conversion process.

Beginning with the time when the "barbarian" tribes of Europe became Christians in the latter days of the Roman Empire, conversion to Christianity has never meant the total abandonment of traditional spiritual and religious folkways. "Conversion" has usually meant a syncretistic accommodation between Christian mores and traditional and popular folk religion--as we ought to realize every year when we celebrate Christmas! The confesionarios which survive from Alta California demonstrate clearly that the conversion process there was exactly the same. The famous Choris picture of Indians dancing in the plaza of Mission San Francisco while two padres are looking on from the sidelines illustrates the same point. In California, as in every other field of Catholic missionary activity, "conversion" really meant the creation of a religion that was, in many ways, fundamentally new, as each group developed its unique mix of Christian and traditional ways. Bouvier's evidence indicates that indigenous women were central to this process in Alta California.

Bouvier's important book, then, is a notable contribution to the history of California. It deepens our understanding of what early California was actually like for all its inhabitants. And it pushes us in a series of promising and important directions for the future.