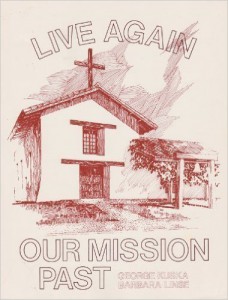 Live Again Our Mission Past

CMSA has always had members who are teachers, but over the last several years, it seems their numbers have grown. Perhaps this is the result of their seeing the CMSA Website; if so, we are glad they found us! Certainly, the amount of e-mail that comes to the CMSA shows that fourth-grade teachers, parents, and students are very much interested in locating mission-related resources. Another extremely useful source is LIVE AGAIN OUR MISSION PAST, a 166 page soft-cover book produced by CMSA members George Kuksa and Barbara Linse. George did the art work and Barbara the writing. A new edition, which is bi-lingual, was published in 1992; in 1998 it went into its 12th printing. This edition is approved by the California State Department of Education and would be a fine addition to any fourth teacher's personal/professional library.

LIVE AGAIN OUR MISSION PAST is chock-full of ideas and kid-friendly information: an historical description of each mission along with a pen-and-ink sketch plus the mission's address and schedule; a play about early Spanish explorers; legends; arts and crafts projects; games; a Spanish-English glossary for Spanish California; a bibliography; and even a section on food where Barbara Linse has adapted a number of recipes that might have been cooked at the missions. She has updated some of them (e.g. using today's Monterey Jack cheese or double-acting baking powder in some recipes) to accommodate modern tastes or ingredient availability.

Most of the recipes call for corn in one form or another: tortillas, masa (dough) for tamales, or masa harina (corn flour) for atole. It is worth pointing out that the nutritional level of protein in any of these was surprisingly high. This was thanks to the ancient Mexican (i.e. Pre-Columbian) method of cooking corn kernels with lime or wood ashes, which softened them up and made it easier to remove the hulls surrounding each kernel. The resulting product was called nixtamal, and in the opinion of culinary historian-anthropologist Sophie Coe (in AMERICA'S FIRST CUISINES, 1994), nixtamalization was one of the most important steps taken by ancient Mexicans in the evolution of higher cultures precisely because it increased the nutritional value of corn so dramatically. What was good for the Aztecs or Maya was good also for California mission neophytes, particularly if protein-enhanced tortillas, atole, or tamales were combined with legumes (many varieties of which were produced and consumed at the missions).

Here are four recipes as they appear in LIVE AGAIN OUR MISSION PAST:

ATOLE ~ This thick, hot drink, is not unlike thin mush. It was a favorite for Mission Fathers and Indians and is enjoyed all over Mexico today as it was in the past..

Mix 1 cup of corn flour (masa) or rice flour with
2 cups of cold water and
a pinch of salt.
To this add 2 cups of boiling water.
Cook it, oh, so slowly; for 1 hour.
There are many ways to make atole.
For plain atole ~ serve as is.
For spicy atole ~ add a little chile.
For fruit atole ~ add some fresh or canned fruit
For sweet atole ~ add a little brown sugar with cinnamon
For chocolate atole ~ add cinnamon, sugar and grated Mexican or bitter chocolate to the atole and you have made champurrados ~ or a "full bodied" hot chocolate.

MEXICAN HOT CHOCOLATE ~ Hot chocolate was very popular among Mission Members, Neophytes and Priests alike. The chocolate was brought from Mexico on trading ships. Chocolate beaters [molinillos], used to fluff up the chocolate cocoa, are available in Mexican food stores. Squares of bitter chocolate are second to Mexico's own sweet chocolate "rounds." Milk, eggs, sugar, and cinnamon can all be used in making Mexican hot chocolate.

In a small heavy saucepan bring water to boil; stir in chocolate; mix over low heat, stirring until the chocolate is melted. Pour the mixture into an earthenware pitcher and whip it to a froth with a wooden molinillo or mix in blender for 2 to 3 seconds until frothy. Add cinnamon to make it fit for a party. Serves 2.

In large kettle cook neck bones in chicken broth with onion and garlic for about 2 hrs.
Remove neck bones, cut off meat, and return to kettle.
Add pork cubes. Cook 45 minutes.
Remove seeds and veins from dried chiles.
Soak in boiling water about 20 minutes. Drain. Puree.
At end of 45 minutes test to see if pork is done.
Continue cooking if pork cubes are not tender.
Add the pureed chiles (or chile powder), hominy, salt and pepper. Cook 15 minutes. 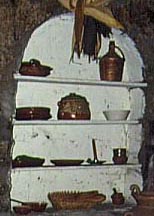 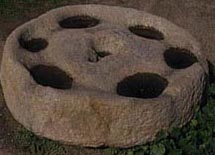