A Day in the Life of A Friar

A Day in the Life of A Friar
By Tom Davis

A little over a year ago while attending the San Antonio Missions, National Parks first Quincentenary Symposium on THE SPANISH MISSIONARY HERITAGE, held in San Antonio, Texas, it became apparent to me that many of the so-called experts knew little if anything about the Franciscan Friars who came to the Spanish Borderlands. The misunderstandings and false assumptions which were being passed on as facts lead one to believe that there is as much misinformation about the Spanish Friars as there is about the people they came to serve. Hopefully, today we can begin to eliminate some of that misinformation.

The Franciscans, the Order of Friars Minor, trace their beginnings tothe 13th-century Italian Saint, Francis of Assisi. Franciscan Friars live a life based on the Rules of St. Francis. They try to imitate Christ by living a life based on the religious vows of poverty, chastity and obedience. Their lives are based on the Gospel message "I come to serve... " The Spanish Friars who came to California lived by these principles. They were men of prayer and faith. All were well educated, with college or university degrees. Most came from Spain, the largest group coming from the Isle of Mallorca.

All the friars prior to their service in the missions went through an intensive training period at one of the Apostolic Colleges. The College of San Fernando, in Mexico City, was responsible for sending priests and governing the Missions of California during the Spanish Period. It was at San Fernando that they received an education on native languages and customs, approaches to evangelization, and various crafts and skills which would be needed and could be taught to the native peoples.

The image of the short, plump balding friar which many people hold was far from the case. Friars came in all sizes and shapes. Each wore a gray colored robe (habit) made of wool with a hood, the dress of a medieval beggar. Around his waist was tied a rope known as a Cincture. The Cincture had three knots tied in it to remind the friar of his vows of poverty, chastity and obedience. Hanging from the Cincture was a rosary and cross so he could pray and reflect upon the Mysteries of Christ's Life. He also had a pouch to carry a few personal things, such as a prayer book or journal; a large brimmed hat and a walking staff. A friar did not carry or handle money nor did he ride a horse when traveling. Friars traveled most of the time by foot, using a horse or donkey only for long trips or those journeys with time constrictions.

So what was the daily life of a friar like during the Mission period of California? One thing for sure, it was not one of Sangrias and Fandangos. Nor was it one of slave masters or sadistic over-lords who saw the Native Californian as chattel. It was a life of hard work and sacrifice, of cooperation and faith by all. The Franciscans of California began and ended each day with prayer. As priests, they made a promise to pray for the needs of the universal church as well as for their own individual needs. Thus, seven times during the day were set aside in which they prayed their prayers and the Divine Office, starting as early as 2:00 am. They rose at sunrise and began the day with morning prayer and meditation, then celebrated mass around 7:00 am, followed by the Doctrina in the Church. After church a simple breakfast. The friars ate bread, fresh fruit, milk, eggs, vegetables, soup and, on special occasions, cheese, fish and red meat.

After the morning meal, the friars would begin their work day. It could be writing letters to officials in Mexico City or updating registers or diaries. The friars also could be outside supervising work on a building project, gathering different fruits, vegetables and nuts at harvest time. They might consult with the majordomo of the mission or some of the ranch hands about mission live stock.

9:00 am The friars would work with the children teaching them religion, music, language etc. 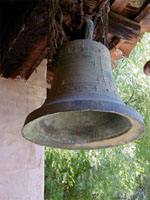 10:00 am They would visit the sick and elderly.

11:00 am The friars would have their midday meal of fruit, soup, milk, and bread.

12:00 noon They went to the church to pray the Angelus and other midday prayers. Prayer was followed by a siesta of several hours.

2:00 pm The mission once again came alive with work. The friars would continue to visit, counsel or write letters and reports.

3:00 pm They took time to say the Rosary or other prayers and devotions.

4:00 pm The padres once again worked with the children, especially instructing them in music or games.

5:00 pm More prayers and the Doctrina in the Church.

7:00 pm The friars would have a light evening meal of soup, bread, and fruit. After the meal the friars would relax, read, play cards and socialize until night prayer and time for bed, in most cases not much later than 9:00 pm, only to awake around two in the morning and start all over again.