The Earliest Libraries in the Californias: Jesuit Missions of Baja California

The Earliest Libraries in the Californias: Jesuit Missions of Baja California
By Robert H. Jackson with Anne Gardzina

The founding of Nuestra Señora de Loreto on 25 October 1697 by Father Juan María de Salvatierra marked the beginning of the permanent occupation of the Californias by Europeans. Although there are no known specific reports of the entry of books either by missionaries in their baggage or by cargo shipments, it is evident that, as the range of activity increased, each missionary established a library at his respective mission. These libraries can be divided into four sections: the working section of religious books such as missals, breviaries, diurnals, bibles, devotionaries, sermons, catechisms, and confessionaries; the study section of works of theology, philosophy, patristics, metaphysics, edifying letters and biographies, and Indian languages; the reference section of works on law, medicine, architecture, mathematics, natural history, cooking, and manual arts; and, the entertainment section with books of history, poetry, essays, and novels. Due to the isolation of the peninsular missions, these libraries were the only form of contact with Western culture for the university-educated, elite missionaries of the Society of Jesus. In that the sole cultural companion of the Jesuit in Baja California was a single soldier, frequently illiterate, the few books in the mission were the fathers' only means of expanding their knowledge and of entertainment. There was evidently an active exchange of volumes between missions, and also, in many instances, there were multiple copies of some titles throughout the peninsula. 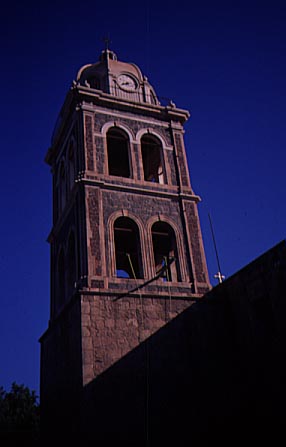 With the Pragmatic Sanction of Charles III in June of 1767 decreeing the expulsion of the Society of Jesus from Spanish domains, the Baja California missions were transferred to the Franciscans in the following year, and the latter, upon advancing their activities to Alta California, relinquished the peninsular missions to the Dominicans in 1773. As a result of these transfers, inventories taken between 19 May and 28 June 1773 include abbreviated titles of volumes contained in the respective libraries. Due to the passive nature of the Franciscan occupation and the need for more essential items from the former Jesuit missions in Alta California, these libraries were little changed from the date of expulsion. Located in the Archivo General de la Nación, Mexico, Misiones 12, expediente 10, the full inventories in their original form have been published by Eligio Moises Coronado, DESCRIPCIÓN E INVENTARIOS DE LAS MISIONES DE BAJA CALIFORNIA, 1773 (Palma: Institut D'Estudis Balearics, 1987.), and the library inventories, with complete bibliographic entries, appear in Michael Mathes, "Oasis Culturales en la Antigua California: Las Bibliotecas de las Misiones de Baja California en 1773," ESTUDIOS DE HISTORIA NOVOHISPANA 10 (1991), 369-442.

With the eventual abandonment of Baja California missions between 1833 and 1855, their libraries were also gradually dispersed by theft, neglect, or exposure to the elements. In that the Jesuit missions were the sole occupants of the peninsula during their existence, books were not branded, marked, or otherwise identified, and to date, no known title once pertaining to these missions has been located. Nevertheless, the inventories present excellent insight into mission culture, and particularly notable is the high number of works by Jesuit authors, the predominance of titles in Castilian, the number of imprints from New Spain, and the 133 titles of history and biography in light of the fact that in the sixteenth and seventeenth centuries, most American libraries primarily contained works in Latin, printed in Europe, and treating strictly religious, classical, or legalistic themes.

The following provides a statistical overview of these earliest California libraries:

Number of Titles by Language:

Number of Titles by Subject:

Places of Imprint in Spain: