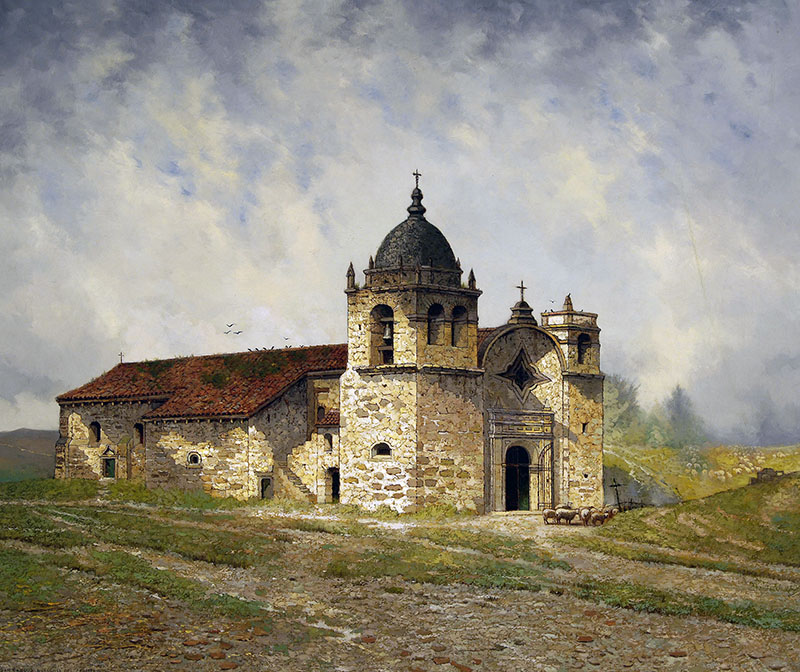 Mission San Carlos Borroméo de Carmelo, also called Mission Carmel, is the second of the mission chain and the personal favorite of Father Junipero Serra. Founded on June 3, 1770, it was named after Saint Charles Borromeo, a 16th-century archbishop of Milan.

Fourteen yeas after founding the mission, Father Serra passed away in this bed, and the mission serves as his final resting place. His body, however, has not rested in peace. On four different occasions, his remains have been removed for examination in the process of sainthood.

The church at present-day Mission Carmel is a fitting tribute to its founder. Father Serra’s last wish was for a new, stone church to replace the original adobe chapel. It took Father Lasuén fourteen years to fulfill Father Serra’s dream – the new church was completed in 1797. Outside, the mission garden commemorates the 200th anniversary of Father Serra’s death. Near the church is a smaller chapel, frequently used for prayer.

Mission Carmel was the center of the mission activity of Junipero Serra, and for this reason, many beautiful artifacts of silver and bronze can be found here. One of the most popular artifacts is the Serra Memorial Cenotaph, made of travertine, marble, and bronze. This monument depicts four missionaries, including Father Serra. All four of the men depicted are buried under the church sanctuary.

From the standpoint of government, Mission Carmel was the most important, serving as the headquarters for the entire mission chain from 1770 to 1803. The fathers, though, did take time away from their administrative duties to engage in scholarly works. California’s first library was started here and has grown substantially from the thirty books it contained in 1778.

When the missions were secularized in 1834, the fathers lost control of the mission and it fell into disrepair. The land was sold and the mission was neglected for thirty years. The church stood with no roof until restoration efforts began in 1884, bringing this grand structure back to its earlier beauty. Mission Carmel was made a Minor Basilica by Pope John XXIII in 1960.

Spanish Franciscan priest, explorer and colonist of California, Saint Junípero Serra is known as the "Apostle of California" and “The Founding Father of the California Missions”.

Saint Pope John Paul II beatified Serra in 1988. Serra was canonized as a Saint of the Catholic Church by Pope Francis during his official visit to the United States on September 23, 2015 at the National Shrine of the Immaculate Conception in Washington D.C.

Father Serra oversaw the planning of each mission from Carmel.  He established 9 Catholic missions in California Indian regions, with a total of 21 missions eventually being established San Diego to Sonoma.

On August 28, 1784, Father Junípero Serra died at Mission San Carlos Borromeo (the Carmel Mission) and he is buried in sanctuary floor of the Basilica.

Throughout the Carmel Mission Basilica Museum visitors can view many of the personal belonging, liturgical furnishings, and relics of Saint Junípero Serra on public display.

Directions to the Mission
From CA-156/CA-1: South of Monterey, exit onto Rio Road and travel west.