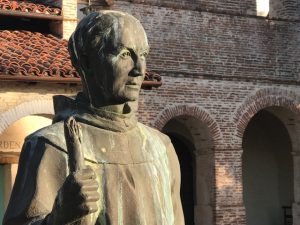 Saint Junípero Serra took the name Junípero from the Franciscan friar, Brother Juniper, who lived from 1210-1258 in Italy and was received into the Order of Friars by Saint Francis of Assisi himself.Francis would often pun, "...my brothers, that I had a whole forest of such Junipers."

Saint Junípero Serra was a Spanish Franciscan friar and missionary who lived from 1713-1784. He desired to travel from Spain to Mexico as a missionary. He landed in Veracruz in 1749 and traveled by foot on the Camino Real to reach Mexico City.On the journey he suffered a swollen foot, which plagued him the rest 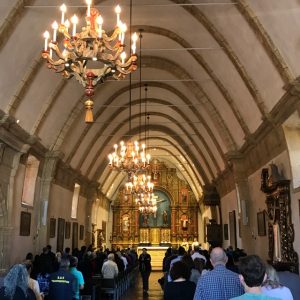 of his life, but did not stop him from traveling up the coast of California founding 9 of the 21 California Missions from San Diego to San Francisco. Serra was an intelligent and learned man, yet he had great humility and a desire to serve the poor.Junípero Serra was canonized on September 23, 2015 by Pope Francis during the Pope's trip to the United States.

We commemorate the Feast Day of Saint Junípero Serra each year on July 1.Last year CMF was fortunate to attend the liturgical celebration of Serra's Feast Day held at San Carlos Borromeo del Carmel (pictured). It was a beautiful day commemorating Serra's great legacy of his passionate religious faith and his tireless sacrifice caring for the poor and marginalized of California.

In the past few weeks we have seen exquisite works of public art depicting Junípero Serra in bronze torn down in both San Francisco and Los Angeles. To many, Serra was a hero to those he served in California in the 18th Century, however, the early founding of California was wrought with difficulties and clashing of many civilizations.  Serra's mission in California was to help those in need, yet the truth of his story and legacy is often confused and misrepresented.

Recently, several Catholic entities have expressed concern and offered clarification regarding these recent events. We hope that in time this will lead to a greater understanding of who Junípero Serra, was and what he contributed to the founding of California.

Excerpt from Archbishop Jose H. Gomez of the Archdiocese of Los Angeles:
"Historical memory is the soul of every nation. What we remember about our past and how we remember it defines our national identity - the kind of people we want to be, the values and principles we want to live by. "...We cannot learn history's lessons or heal old wounds unless we understand what really happened, how it happened, and why."

Excerpt from Archbishop Salvatore J. Cordileone of the Archdiocese of San Francisco:
"St. Serra made heroic sacrifices to protect the indigenous people of California from their Spanish conquerors, especially the soldiers."

Excerpt from California Catholic Conference:
"The historical truth is that Serra repeatedly pressed the Spanish authorities for better treatment of the Native American communities. Serra was not simply a man of his times. In working with Native Americans, he was a man ahead of his times who made great sacrifices to defend and serve the indigenous population and work against an oppression that extends far beyond the mission era. And if that is not enough to legitimize a public statue in the state that he did so much to create, then virtually every historical figure from our nation's past will have to be removed for their failings measured in the light of today's standards." 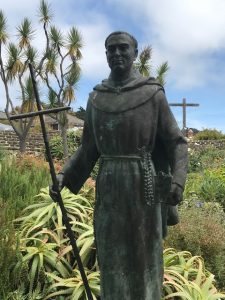 In recent years, in response to umbrage expressed by some individuals who consider certain historic monuments or even the names of individuals a painful memory of past and present suffering or discrimination against some particular group, a number of cities, state agencies and educational institutions have chosen to remove monuments or references to Junípero Serra, founder of the Alta California mission chain, and others associated with California's mission era.

More recently, in connection with the protests around the killing of George Floyd and others, there has been a wave of attacks on statues of Serra, as well as monuments to people such as Juan Rodríguez Cabrillo, who explored the California coast in 1542, or even Miguel de Cervantes, author of Don Quixote, have also been vandalized. In many cases, the justification for these actions comes from misunderstood, partial or even false information about the Spanish and Mexican legacy in California.

The reasons for such actions have been varied and often appeal to a sense of justice towards marginalized peoples. Whereas, this expression of pain is fully justified, the net effect is the increasing disappearance of the shared history of California, Spain and Mexico from public spaces.

The Importance of Education and Scholarship

An honest and vigorous discussion of our state's history is always healthy, but it is impossible if not informed by education based on solid scholarship. For example, conflating the missions -- much less Junípero Serra himself -- with genocide is not supported by the historical record. Moreover, the soldiers, craftspeople and settlers who established California's presidios and pueblos were themselves a diverse people: Native American, European, African, and mixed ethnicity.

The California Missions Foundation was established 1998 with the objective of preserving the missions and other related historic sites and cultural resources for the benefit of the public. We therefore call on civic leaders to promote an honest and vigorous discussion of our state's history and provide the venues for thoughtful community discussions regarding these monuments. From such discussions can then come thoughtful outcomes with meaning to the community.

California's history is the common heritage of people of multiple cultures and ethnicities. The California Missions Foundation asks the community, the Catholic Church, our government officials and our schools to partner with us in teaching the truth behind the diverse heritage of California history, to recognize, promote and preserve the memory of our historical heroes from every ethnic and religious group. Seeking to remove all public references to Junípero Serra and the mission era does a disservice to the historical legacy left to future generations. That legacy should be protected, shared and debated, but not erased. In fact, it would be better to concentrate on improving the legacy by creating new memorials to peoples who preceded the Euro-American arrivals such as the memorial garden dedicated to the Pa'twin people in the UC Davis arboretum, or the wall that lists those who lived and died at Mission San Francisco Solano de Sonoma. The California Missions Foundation desires to tell the story of California history and recognize every nation that helped shape our history.

Support for Preservation, Restoration and Scholarship

California Missions Foundation is the only organization dedicated to the long-term preservation and restoration needs of the California missions and their associated historic and cultural resources for public benefit. CMF publishes a scholarly journal Boletin, as well as an extensive bibliography available for those interested in an in-depth understanding of all aspects of the mission period: https://californiamissionsfoundation.org/research.

Many of our members have expressed concern and asked what they can do to help protect the Serra Statues and the Missions at this time. We are opening a Statue Preservation Fund specifically for this purpose.  If you would like to donate to this fund, please click here and designate your donation in the comments section for this purpose.

The Writings of Junípero Serra 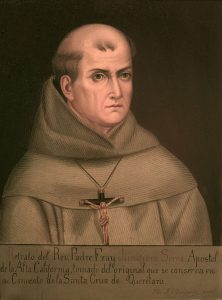 Father Junípero Serra wrote many letters during his travel to the New World. Here you can read his actual letters that were translated into English and document his life in California.
×