June 30, 2017 - As CMF continues to lead the U.S. effort to seek an UNESCO World Heritage Cultural Corridor designation for El Camino Real de las Californias, a big announcement happened this week as the Gaviota coast section of the Camino has been designated a State Scenic Highway. Dedicated in a ceremony at the Arroyo Hondo Vista Point, this 20-plus mile stretch of the Camino Real de las Californias is one of the last remaining undeveloped portions of more than 600-miles of Caminos that were the main transportation corridors in Alta California from San Diego to Sonoma. Soon the golden poppy signs identifying this stretch of Highway 101 as Scenic will be placed along the route.
The 21 miles designated as 'scenic' is a most pristine section of the El Camino and brings further attention to the Camino Real as a whole. This is the route of Portola in 1769 and de Anza in 1776. It winds its way westward from Goleta to beyond the Gaviota tunnel at the intersection of Highways 1 and 101. It includes grand vistas and unspoiled coastline with hills and arroyos full of biodiversity.
Today there are three State Parks beaches in this short section of the Camino: Gaviota, Refugio and El Capitan. Native American village sites dot the landscape. The Camino originally followed the paths used by Native Californians as trading and communication routes.  These trails eventually became El Camino and today are the highways linking our states' towns, people and historic sites.
CMF continues to draw more attention to El Camino Real de las Californias, and the Native trails that preceded it. Hopefully one day it will all receive designation as a UNESCO World Heritage Cultural Corridor. The California Missions Foundation continues its strong support of this effort to recognize the important heritage and contributions of both Native Americans and the Spanish to develop the routes of communication and trade in the Californias.  The Scenic Highway designation is a great step in that recognition.

A multi national initiative including leading agencies in both the US and Mexico continues to push for an UNESCO World Heritage Cultural Corridor Nomination for El Camino Real de las Californias and related historical sites found along this impressive cultural corridor in both Californias.

Recently, the first of several Presidio District Committee Meetings was held in San Diego and hosted by CMF. The two-day event focused on the criteria for seeking an UNESCO Nomination as well as the necessary steps to be put on the Tentative Nomination List in both countries. The meeting, held at the historic Cabrillo National Monument at Pt. Loma, featured representatives from Sacramento, California Native Sovereign Nations, the CMF board, historical groups from San Diego and surrounding communities, early California descendents, and officials from the northern half of Baja California. Keynote speaker for the El Camino Real de las Californias gathering was Dr. Ray Ashley, executive director of the San Diego Maritime Museum, who spoke about the significance of the maritime corridor as a parallel and simultaneous Camino for both Californias. The maritime component will continue to play an important part as the story of the Camino in the Californias is further told.

The official web site of the CMF-led Multi National UNESCO Initiative is elcaminorealdelascalifornias.org.

Click on the photos below to see full size. 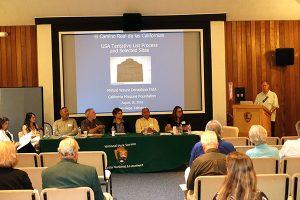 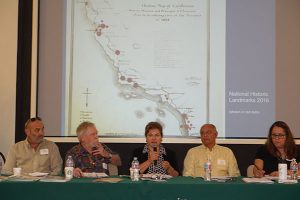 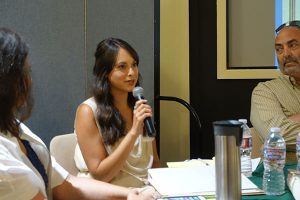 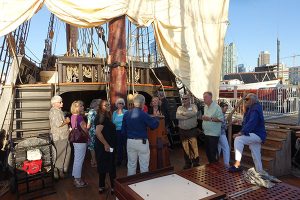 Dr. Ray Ashley addresses attendees aboard the San Salvador during the ECR reception. 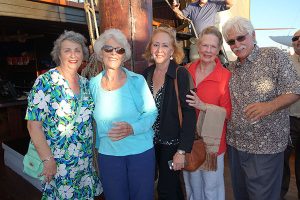 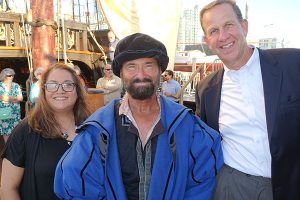 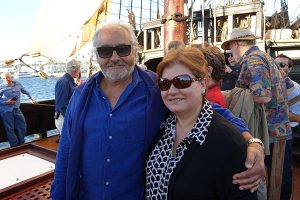 During the past several months, CMF Executive Director David A. Bolton has met with top government officials in Spain and the US gaining support for the El Camino Real de las Californias Multi National Initiative.

"Support and reaction to the effort has been very favorable," said Bolton. "Whether in Spain, here in California or in Washington DC, everyone is supporting this Multi National Initiative." 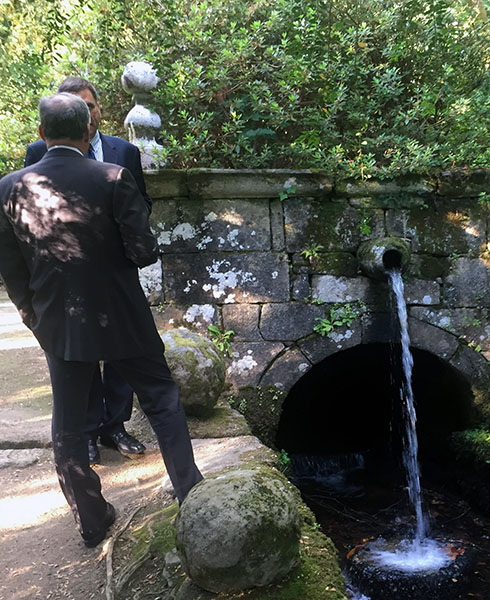 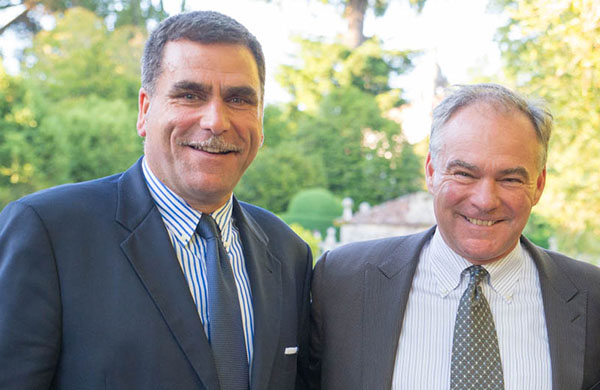 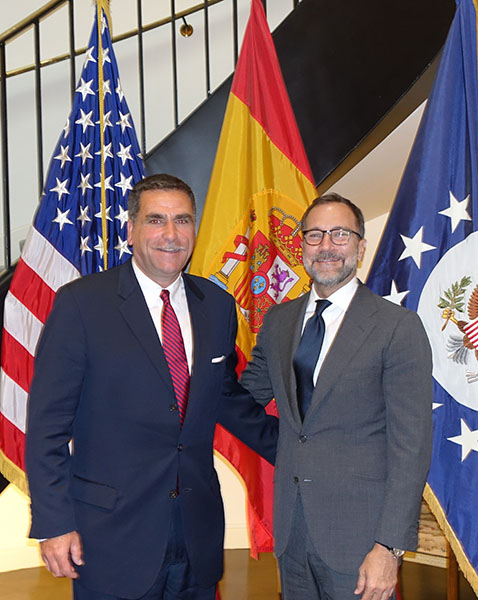 (Above) CMF Executive Director David A. Bolton With the US Ambassador to Spain Mr. James Costos. and (below) at the US-Spain Council Forum with Spain's king, His Majesty Felipe VI. 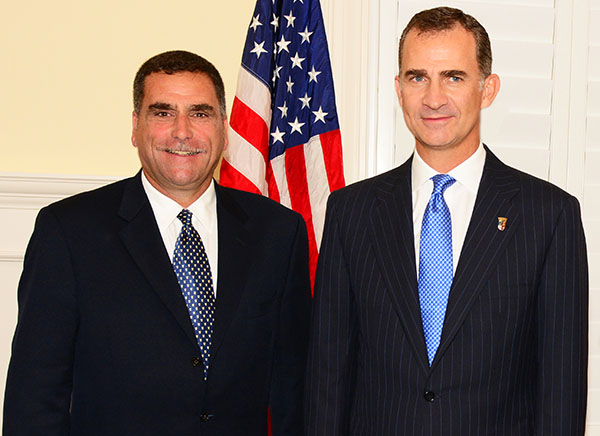 A Multi-National Initiative announced this past fall by CMF and leaders of both CAREM and INAH is gaining strength as key representatives from both countries met recently in Tecate, B.C. to continue the process of seeking an UNESCO World Heritage Site Nomination for El Camino Real de las Californias as a Cultural Route.

Stretching from Los Cabos in Baja California, to Sonoma in Alta California, El Camino Real de las Californias includes a variety of historic elements both from the Spanish and Mexican periods as well as from countless Native American groups who have called the two Californias home for thousands of years.

This Multi-National Initiative is an effort between these two Californias historically linked as a Cultural Route and boasting picturesque landscapes, monuments and other historically significant fabric. Please click here to read more about UNESCO Cultural Route criteria.

On the U.S. side, CMF officials will be meeting with representatives of the National Park Service, California State Parks, Dioceses, Religious Orders, Native Americans and community leaders throughout California. Public input and updates are key to the process, according to CMF staff.

CMF officials continue to put together a working group that will represent the organization at the local level. CMF is currently looking for individuals that are interested in being a Captain for a specific section of El Camino Real in Alta California. This individual would be an official member of the "Multi-National Effort" and would help to identify the exact route of the original and subsequent Caminos through their specific area as well as be a representative for the effort with the respective local communities. CMF will be breaking down the Caminos between Missions, and is currently looking for individuals that would like to head up a specific section, ie. Mission San Diego to San Luis Rey; Mission San Luis Rey to San Juan Capistrano, San Juan Capistrano to San Gabriel and so forth.

If you are interested in joining this exciting Multi-National effort involving the two Californias, please email us by May 31 with a brief overview of your background and interest level to ElCaminoReal@californiamissionsfoundation.org. Please click here to read more criteria for being selected as an ECR Captain. This will be a historic effort, benefitting not only El Camino Real in both Calfornias but also all of the historic sites, communities and people found along this Cultural Route. 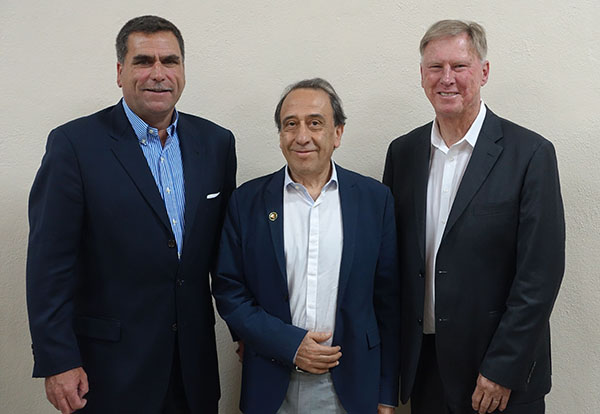 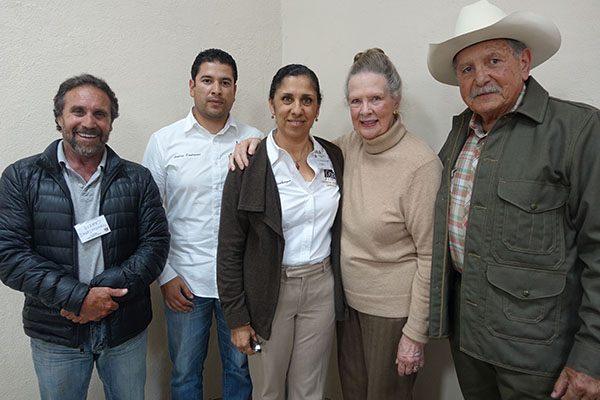 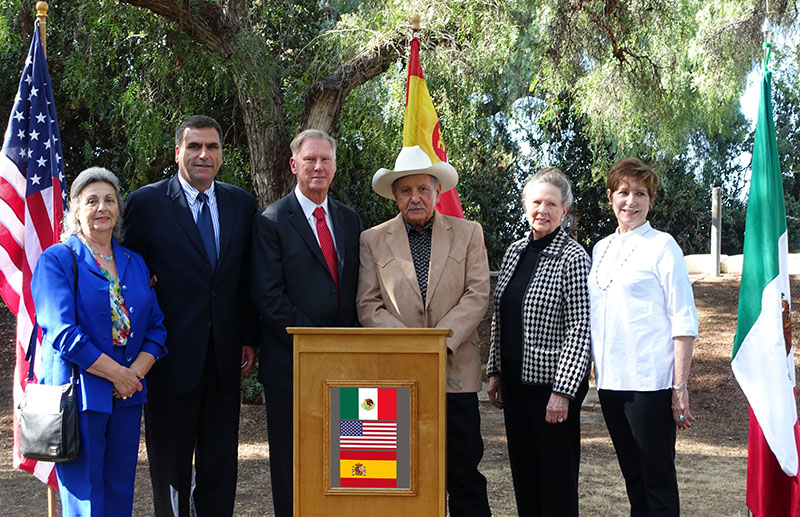 On the site of the original Presidio in San Diego, two leading organizations dedicated to historic preservation in their respective countries announced a Multi-National Initiative to work toward earning an UNESCO World Heritage Nomination for El Camino Real de las Californias.

Flanked by representatives of the U.S., Mexico and Spain, the leaders of California Missions Foundation and Corredor Histórico CAREM, A.C. outlined plans for this multi-year, Multi-National Initiative that will include partnering with government agencies in both the U.S. and Mexico, including Mexico's Instituto Nacional de Antropología e Historia or INAH, US/ICOMOS, California State Parks, the National Parks Service as well as with the San Diego Maritime Museum, the Santa Barbara Trust for Historic Preservation, Historical Organizations, Native American groups and many other organizations. In addition, this Multi-National Initiative will include community members from a variety of backgrounds including historians, Native American groups and other experts in both countries.

"Today we reaffirm our mutual commitment to begin our shared vision of El Camino de la Californias as a World Heritage Site in partnership with Mexico and Spain." said Milford Wayne Donaldson, FAIA, chairman of California Missions Foundation.  "We also embark on a journey to tell the world of our true origin story of European contact in the United States, not as Pilgrims and the Mayflower in 1620 but as Juan Rodríguez Cabrillo in 1542 as he sailed San Salvador into San Diego harbor. When we succeed, California will add it's first cultural World Heritage Site to our two natural sites, Yosemite and the Redwoods. Together, as signatory nations, we will work as one comunidad to not only protect the El Camino de la Californias outstanding universal value, but also to bring us together as familia to learn about our common histories as we tell our stories."

"The Camino Real de las Californias represents a cultural route that will be of universal value," said CAREM President Hernán Ibañez. "The peninsula of Baja California, Mexico is an enthusiastic partner in this effort."

"This designation could mean a powerful tool for landscape preservation, a way to engage and value living peoples and to preserve historical touchstones (missions, trails, rock art and indigenous sites and traditions)," said Julia Bendimez, regional director for INAH in the state of Baja California.

Unlike other Caminos Reales in the Americas, and unique to California, El Camino Real de las Californias had both a land and maritime component.

"As many historians are aware, more often than not California was depicted as an island completely detached from the rest of continental North America in maps from the beginning of the seventeenth century until well into the eighteenth century," said Dr. Ray Ashley, president and CEO of the San Diego Maritime Museum. "While this is now considered the longest running cartographic error in the history of mapmaking, in one sense it wasn't an error at all. California was, to all practical purposes, connected to the rest of the world mainly by water during the age of sail and not only functioned as an island, but itself was a series of islands connected to each other by a network of missions, presidios, and ranchos, linked through a series of ports and the ships which used them. Thus, the El Camino Real de las Californias wasn't simply a road linking missions, but an early intermodal transportation network in which the majority of goods, people, knowledge, and political power moved principally by sea and then diffused over land."

As part of the work ahead for this Multi-National Initiative, a series of working sessions and summits have begun to explore all aspects of a World Heritage Nomination for El Camino Real de las Californias. First up was an INAH-sponsored two-day gathering in Ensenada, B.C. December 9-10, 2015 followed by the 33rd California Missions Conference this February 12-14, 2016 in San Juan Bautista, CA that will feature as its theme, "El Camino Real de las Californias." The California Missions Foundation and the California Mission Studies Association merged officially January 1, 2016 and the February event will be their first combined conference.

"Along El Camino Real that began with presidios, pueblos, ranchos, and missions, a new civilization was born harnessing the energies of many peoples and cultures and laying the foundations for the Californias we all live in today." said Dr. Jarrell Jackman, executive director, Santa Barbara Trust for Historic Preservation.

"This designation could mean a powerful tool for landscape preservation, a way to engage and value living peoples and to preserve historical touchstones (missions, trails, rock art and indigenous sites and traditions)," said Julia Bendímez, one of two delegates for Mexico's INAH throughout the Baja California peninsula.

World Heritage Designation by the United Nations Educational, Scientific and Cultural Organization (UNESCO) signifies being of special cultural or physical significance. There are nearly 1,000 designated sites worldwide, including 33 in Mexico and 23 in the United States. El Camino Real de las Californias would be the first Multi-National Nomination for the two countries.

"So many people have spent so many years researching, studying and understanding El Camino Real de las Californias," said CMF Executive Director David A. Bolton. "This Multi-National effort to receive UNESCO World Heritage Nomination is a tribute to not only those individuals but also to everyone that has traveled the trails, routes and roads of El Camino Real de las Californias from Native American groups to the Spanish, from those in Mexico today to those in the United States."