"Nothing defines California's heritage as significantly as the 21 missions founded along the coast from San Diego to Sonoma. Their beauty, stature and character underlie the formation of California." – Dr. Knox Mellon

Former CMF executive director and one of the legends in California historic preservation, Dr. Knox Mellon, passed away last night on his beloved Monterey Peninsula following a sudden brief illness. His dear wife Carlotta, who teamed with Knox on so many CMF projects, announced the passing “with great sadness.”

Knox Mellon was truly a legend.

Following stints as California’s State Historic Preservation Officer, Knox was hand-chosen in 2004 by CMF Founding Chairman Emeritus Stephen T. Hearst to take over at the helm of CMF.

During the eight years under Knox’s leadership, CMF became extremely successful in raising important funds to help preserve, conserve and restore our California Missions and related historic sites. Millions of dollars were raised and dozens and dozens of important projects were funded through the efforts of CMF and under the leadership of Knox Mellon.

“We are all very sad to hear of Knox’s passing,” said current CMF Chairman Michael H. Imwalle. “Knox will be equally remembered for his time leading CMF as well as his time spent as California’s Historic Preservation Officer. He was supportive of countless preservation efforts throughout the state.”

Knox had a storied career in preserving historic structures. Everyone who had an opportunity to work with Knox was consistently impressed by his abilities and talents. His expertise and background brought tremendous knowledge and credibility to the California Missions Foundation, where he served as the Executive Director from 2004 – 2012.

“Very few times in life do we have the opportunity to work with someone who is very successful at what they do, and at the same time perform their duties with class, dignity and respect for all,” said David Bolton, who followed Knox as CMF executive director in January, 2013. “Knox left very big shoes to fill at CMF. His efforts did so much to help our Missions. He had a special gift for fundraising and great knowledge of historic preservation. His impact will continue to be felt for many years to come.” 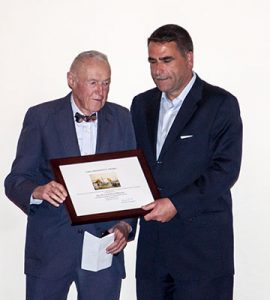 Knox received his Master of Arts degree and a Doctorate in Philosophy from Claremont Graduate College. He spent nearly two decades as a History Professor at both Mount San Antonio College in Walnut, California and Immaculate Heart College in Los Angeles. He went on to serve as California’s very first State Historic Preservation Officer from 1975 – 1983, then for a second term in the early 2000’s before joining CMF in 2004.

“Knox was a champion of protecting our heritage during the most critical time,” said former CMF Chairman Milford Wayne Donaldson who also followed Knox as the California State Historic Preservation Officer. “Knox established boundaries and rules for historic preservation in our state at a time when California was experiencing rapid growth. As the state’s first historic preservation officer, Knox laid the foundation for the successes in this area during the past forty years.”

Larry Gould preceded Wayne Donaldson as CMF Chairman: “Part of Knox's legacy can, and will, be measured in terms of the resources he raised to preserve and restore the California missions. Knox established wonderful working relationships with many funders and foundations that consistently supported CMF's preservation efforts. Knox brought wisdom, humor, perspective and wit to everything he did.”

During Knox's time with CMF, the coveted ‘Save America's Treasures’ grant program administered by the US Interior Department awarded CMF not one but four separate grants to finance preservation efforts at Missions San Miguel, San Luis Rey, Carmel, and Santa Barbara. 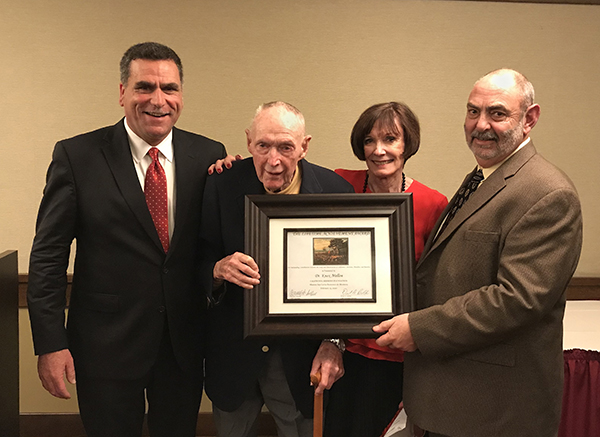 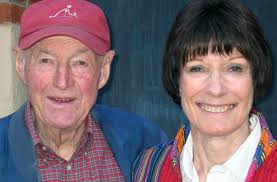 "It was a distinct privilege serving on the CMF Board during Knox’s tenure,” said CMF board member Robert Hoover. “To me, Knox epitomized the best of that generation of scholarly gentleman who were my mentors. Such people are difficult to find any more."

Added former CMF board member Jack Williams: "It would be impossible not to say that Knox gave the foundation so much of himself and that his efforts exceeded any reasonable expectation. I am certain generations to come will recognize his extraordinary talents and skills helped to save some of our most important cultural landmarks." 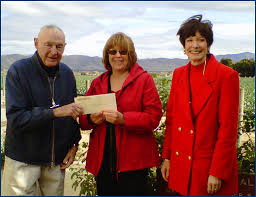 Knox and Carlotta presenting a CMF grant to Carlene Bell at Mission Soledad.

The family has announced that a service for Knox Mellon will be held once it is safe for people to again gather.

Due to his many years of service and dedication to the California Missions, CMF has established a Knox Mellon Memorial Fund to continue the important work of preserving the California Missions and related historic sites in his honor. If you would like to donate to this fund, please click the link below and designate your donation to the Knox Mellon Memorial Fund. 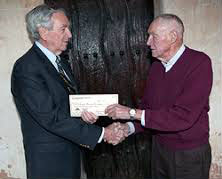